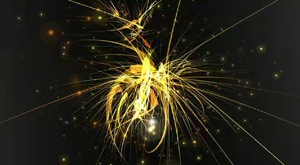 The developers of the Magnetosphere visualiser that was so strongly expected to be included within iTunes 8 have now confirmed all these rumours were correct.

iTunes 8 does indeed feature a new visualiser, and that visualiser is Magnetosphere, as we predicted last week (with thanks to the excellent Create Digital Music website).

Video producer and designer Allan White has claimed Magnetosphere was purchased by Apple for deployment within iTunes. It’s not the first time Apple’s purchased a technology – then called SoundJam, iTunes was itself purchased from now defunct firm, Casady and Greene, in 2000.

"Hey there. Thanks for your interest in Magnetosphere. We’re insanely, ridiculously proud to say that Magnetosphere now lives in iTunes – Apple’s world-class media player for Mac and PC. You can download iTunes with Magnetosphere built-in here. The Barbarian Group no longer maintains, develops or owns Magnetosphere. We do, however, own a lot of shoes."

Magnetosphere was released in May 2007 and pulled from the Barbarian Group’s website some time in February 2008.