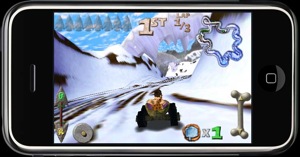 Pangea Software has launched a sale on the Apple App Store, offering all its titles at a discount price – but only for a while.

The company has reduced the price of all five of its iPhone titles, which include Enigmo, Cro-Mag Rally, Billy Frontier, Beer Bounce and Pangea VR Pro. The sale prices appear to be available on both the UK and the US stores.

Brian Greenstone from the company confirmed plans to port its OS X games to the iPhone at WWDC earlier this year, since when both Enigmo and Cro-Mag Rally have won high ratings and steady downloads from users at Apple’s iPhone application store.