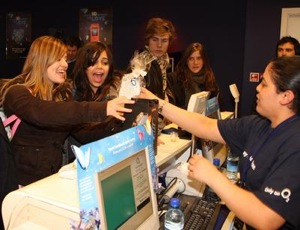 Apple has already seized 6 per cent of the handset market with its iPhone – and the future looks pretty positive too, with UK sales hitting 27,000 every week, says Mobile magazine.

The publication adds that UK sales in the first two weeks following launch of the device crossed 50,000 per week.

Marketshare is  believed to be hovering between a 4% and 6% share of the UK handset market, and even reaching ‘high single digits’ some weeks, according to a source close to the matter.

And in order to maintain the momentum, Apple and O2 have introduced the device on a pay-as-you-go basis. First-week sales of the 3G iPhone racked up around 50,000 units despite the systems faults, but those levels dropped to 32,000 after the first month.

An O2 spokesperson said: "We have a strong relationship with Apple and they are pleased with the sales of the iPhone to date."