Apple CEO Steve Jobs is in Europe, visiting European Competition Commissioner Neelie Kroes in Brussels yesterday, and no doubt dropping down the road to Paris, France to take a look at what remains of Europe’s largest Apple trade show, Apple Expo, which now features everyone, but Apple (maybe we’ll see a surprise announcement?).

Well, at least the CEO may – or may not – be there – he may instead choose to explore the sights and sounds of Paris. Or maybe he popped out for a meal with Mick Jagger, who was in the same meeting yesterday. 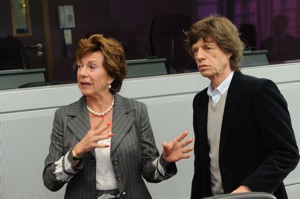 What was the meeting about? Well, that’s pretty important, really. Ostensibly Jobs, Jagger, Apple’s iTunes head, Eddie Cue, and representatives from EMI, eBay, Fiat, UK consumer association, Which? and sundry other chiefs were gathered for a round table debate exploring “opportunities and barriers to online retailing and the European Single Market”.

What that means is summed up by me as a pretty stern warning to companies doing business in Europe that they better forget the whole notion of charging more for the same product in one European country than in another, and they better get used to the idea that European consumers have the right to pick up new products at the best available European price. And the internet could be an absolute blessing on consumers shopping for goods in the recession we face. If the big firms who run everything step up to the plate and respect the common market laws that govern the EU.

Anyway, the people met, they talked, and there’ll be a publication later this year…And while everyone appears to be being all nice about it, under the surface there’s a threat – if big business don’t do what it’s told, then it can expect European laws to appear that will force it too.

Meanwhile, we thought you’d like a few pictures of Jobs and Jagger – and in the image below, you get to see Eddy Cue (to the left of Jobs).. and just below that you can enjoy watching Steve’s GulfStream land in Rotterdam! (Thx to One More Thing). 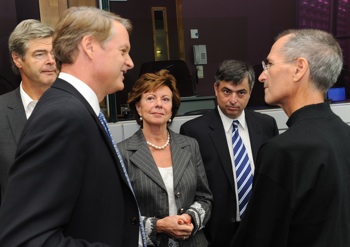 (Update) The One More Thing crew in the Netherlands caught Stevo’s plane at Rotterdam airport.  Apparently, it was parked in the handicap spot.