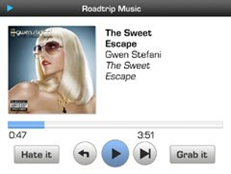 iTunes users in the United States now have a wireless music streaming service that means they can listen to their music almost anywhere – a little like iTunes subscriptions may work, should Apple ever introduce them.

Alltel Wireless has begun offering its customers access to the Melodeo-developed nuTsie service, which allows users to listen to playlists from their iTunes libraries on certain Alltel handsets. nuTsie users can also share those lists with friends across the internet and on their mobile devices.

In addition to being able to play music from their iTunes collections, customers can also listen to recommended music based on their playlists and explore hundreds of thousands of playlists from other users and nuTsie’s music experts, providing a new world of music right at their fingertips.

"Our customers are now relying on their wireless phones to provide entertainment as well as reliability," said Kristi Crum, director of multimedia content for Alltel Wireless. "The launch of nuTsie will maximize the music capabilities on their phones so they can now easily listen to their favorite music from iTunes, no matter where they go."

"nuTsie offers Alltel Wireless customers an easy, inexpensive way to access their iTunes libraries on the go and to hear new music from other users’ playlists and from our own programmed music," added Dave Dederer, Vice President of Business Development at Melodeo and founding member of the Grammy-nominated, multi-platinum rock band The Presidents of the United States of America. "We’re extremely pleased to be teaming with Alltel to bring nuTsie to a wider audience."