Let’s face it, the US and to a lesser extent the global economy is a shambles right now.  People are spending less because they have less disposable income.  Morgan Stanley and other analysts are pointing to that reason and by extension consumer product ordering drops for bringing Apple’s stock price targets down.  While the wider market is also down AAPL is down over 15%, the lowest price it has seen in over a year and its biggest percentage drop in over 8 years.   Some people think this might be a good time to buy, others think it has further to drop.  If it means anything the analysts in question have an extremely poor record on Apple forecasts..so says Philip Elmer DeWitt of Apple 2.0. 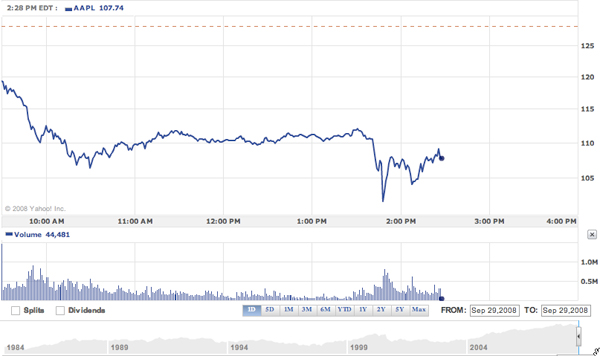 Apple, in its latest earnings call, forecasted a need to cut margins…

Will this lead to some very low margin MacBooks?  We think so…even though Apple, as a rule, doesn’t like to play in the low margin, highly competitive low end market.

At the earnings call, Apple also said that they had innovated in ways that their competitors couldn’t touch.  Perhaps that innovation was in production of a laptop at low cost having very few parts.

We’d like to see MacBooks that line up with Mac Mini pricing.  That might help out the stock price, right?