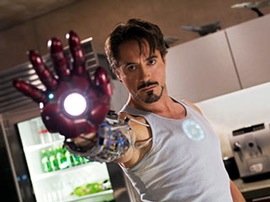 Dell has a plan to take on iTunes – and it’s leading the charge with ‘Iron Man’.

Seems Dell and Paramount Pictures are offering customers who buy a new Dell PC the chance to have new film, Iron Man, pre-installed on their machine. With unavailable elsewhere ‘bonus footage’ (when will someone come up with bonus footage anyone actually enjoys?)

According to the Hollywood Reporter this strategy to offer a film in software format only at a price probably more expensive than it is on DVD in the shops, "is the first step Dell is taking toward setting up a broader digital content storefront that could create significant competition for Apple’s dominant iTunes Store."

Former Apple bloke Tim Bucher leads Dell’s 120-person group that’s developing the company’s digital strategy…does that include charging consumers $20 for a standard definition version of a film that only exists on a computer’s hard drive?

I can imagine that will catch on…