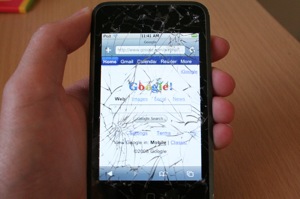 Seems someone at the iPod touch Fans forum had a little accident – out walking he dropped his player and didn’t notice it had gone until some time later when a friend found the ‘touch – well, after accidentally running it over with a pick-up truck (well, that’s the story).

The glass screen of the device is shattered but intact – safe to touch except in one corner of the screen, and the device is dented at the back – but, surprise, surprise – it works.

“As sad as I was, I was still delighted when I pressed the little black button to turn on the iPod. It worked perfectly: the touch screen, the music, the WiFI. Everything was exactly the same, other than the crippled screen and dented back,” the poster declares.

Nice story, good to know how strong this device is – perhaps it should be called the ‘iPod tough’? But there’s two questions I can’t seem to ignore:

1/ How did this man’s mates notice they’d run over such a small object when driving a pick-up truck?

2/ How come he wasn’t listening to the music while walking along the road, (though perhaps the prevalence for running things over while driving pick-up trucks is answer enough for that one).