As you all probably know by now, there will be an Apple event on October 14th (it will be announced "officially" October 7th, but we know its coming). It is widely expected for Apple to update their MacBooks and MacBook Pros at this event. Mac Soda offers all of its predictions for the event.

The MacBook has been trapped in a plastic enclosure throughout its life, seemingly begging to be placed into a nice, cool, aluminum shell. It will finally get its wish… sort of. The MacBook is going to adopt a lot of its looks from the aluminum iMac. While it will be aluminum on the sides and the front, the back will adopt the plastic backing from the iMac, to differentiate it from the MacBook Pro. While that description may not sound appealing, I think we can all trust Apple to pull it off. The enclosure will also be substantially thinner and tapered, as all of Apple’s products have been as of late.

The screen will migrate to a 16:9 aspect ratio, with a new 14.1 inch screen size, closer to the edges. The keyboard will adopt the MBA’s black, backlit (finally!), chicklet keyboard. While this is all fine and dandy, the real story is the trackpad. In order to prepare for a multitouch future, the new MacBook will gain a glass (or at least glass-looking) trackpad to accommodate much more advanced gestures. The possibilities are tantalizing. Whether this trackpad will have a screen or not is uncertain, but the odds say no.

As far as the guts are concerned, the MacBook will receive the Intel Centrino 2 processor. Expect similar speeds in Mhz, but better power management and a faster front size bus (1066). In a Mac Soda exclusive, we revealed the graphics card that will be used in the new MacBooks (click for more info). Also, there will likely be no removable battery

Other possibilities include HDMI output, a redesigned compact power adapter, iChat HD, and Blu-Ray (though that will probably be exclusive for the MacBook Pros).

The MacBook Pro has been milking practically the same enclosure for the past 5 years. Today, its design is still the best in the industry, second only to the MacBook Air. Redesigning the best designed computer on the market is going to result in one amazing computer. The MacBook Pro will stay aluminum, will be even thinner than it is now, with the tapered edges Apple is currently fixated with. It also will add a magnetic latch, replacing the current, pain-in-the-a**, cheap push latch it currently has. The power button also will resemble the MBA’s, rather than the one it has now, that always, without a doubt, dents inward after enough use.

The MacBook Pro’s screen will migrate to 16:9 as well, with a 16 inch screen on the base model, along with an amazing 18.1 inch option (an option I am going to get!). Like the iMac, the screen with receive a black bezel. The MBP will also adapt the MBA’s keyboard, which should complement the design perfectly. I also expect better and louder speakers to be included, as Apple has seemed to be interested as of late in good sound quality. The trackpad will be glass just like the MacBook.

Inside this beautiful monster will house an Intel Centrino 2 processor, with an option for 4 cores. Internal memory will probably be expandable up to 8 GB, and the graphics card will improve as well, though the specific card was not revealed to us. For connectivity, I expect more USB and Firewire ports, alongside an introduction of a new faster Firewire standard. Also, Blu-Ray will be an option. Apple, despite how much they want digital downloads to win, will have to adopt Blu-Ray for its professional clients, and now is the time. It probably won’t be standard, but rather BTO.

Other possibilities, like the MacBook, are HDMI, iChat HD, and a redesigned power adapter. The battery may be removable, but odds are, no.

While I doubt we will see many physical changes to the MacBook Air, I am sure we will at least see the glass trackpad on the Air, along with spec bumps, and a major price drop. Expect the MacBook Air to start at 1299, possibly even lower. If this is not announced at the event, it will be announced shortly after the event. 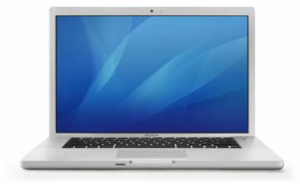 Did you see Apple’s stock yesterday? They don’t have a choice but to release this. As the Mac Mini is to desktops, the MacBook Mini will be to laptops. At 59

9, this is a computer that will be hard to ignore. It will boast 11 inch screen, just so that Steve can make fun of the other guys’ small screens, be fairly thin, made of aluminum, feature a relatively large keyboard, Wi-Fi, glass trackpad (maybe), good connectivity, a combo drive (super drive option), and an iSight camera.

Another possibility is that the MacBook will be the low end model, seeing a major price drop (down to 700-800 dollars), and the MacBook Air will fill the MacBook’s position in the 1000 dollar laptop market. Whichever scenario comes to fruition, whether it be the MacBook Mini, or a major MacBook price drop, one thing is certain: with the economy the way it is, Apple can’t ignore the lower-end marker any longer.

This is not a prediction, it is a possibility. Apple may finally decide to address their lack of a mid-size tower, and release, as I call it, the Mac. Fairly cheap, and enormously expandable, this combined with the MacBook Mini would complete the grid of computers Apple would like to ship (see below). 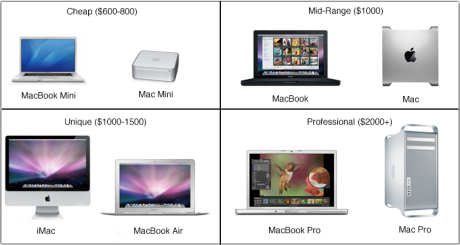 Overall, I think we are in for an exciting keynote. I’m in the market for a new MacBook Pro, so what they announce is what I get!