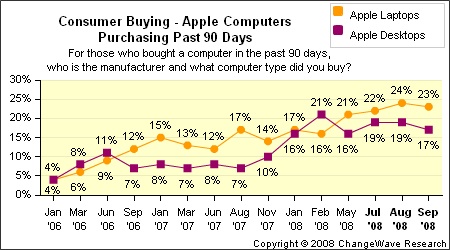 Like all computer and consumer electronics firms, Apple may be hurt as consumer spending slowsdown in reaction to an ailing global economy, the latest research suggests.

The latest ChangeWave consumer survey confirms  a decline in US consumer spending – and suggests Apple may take a hit on its Mac sales as a result. Among respondents who bought a computer over the past 90 days, 23% say they bought an Apple laptop and 17% a desktop – down 1-pt and 2-pts respectively from the August ChangeWave survey.

But while the latest Mac results are down slightly, they’re still quite close to the highs reached in both previous July and August surveys.

When considering the July, August and September surveys in combination, the results say that Apple should meet its Mac sales numbers for the current quarter, but future sales face a more complex environment,

What’s happening, the survey says, among respondents who plan to buy a PC over the next 90 days, just 29% say they’ll purchase an Apple laptop – down 5-pts since August. Another 26% say they plan to buy a desktop, a 4-pt decline.

"These are the weakest looking numbers we’ve seen all year for Apple in terms of future buying – and the biggest drop in visibility in two years," noted Changewave director of research, Paul Carton.

Sure – these statistics makes sense, but we’d like to point out that while there’s been a solid buzz over the iPhone, and while the iPod has seen a product range refresh, Apple’s Macs haven’t seen significant upgrade for months – and with all the hot rumours suggesting a significant release looms this October, we suspect the researchers may encounter a different planned purchase scenario in their next survey. But that’s just our analysis, 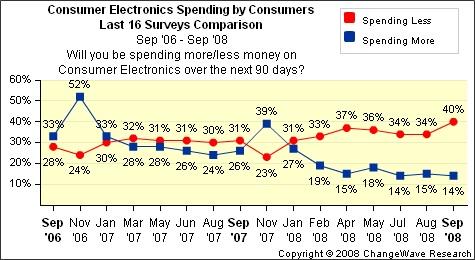 What is true is that there’s going to be an impact on PC purchases everywhere, "Most importantly, overall planned PC buying among consumers remains quite weak. Just 8% of respondents say they’ll buy laptops in the next 90 days and 6% desktops – significantly below our findings from a year ago," Carton said.

"Bottom line, while Apple’s guidance is normally conservative, we expect it to be much more so on October 21st when it provides its Mac sales projections for the holiday season."

The analyst remains pretty positive overall for Apple – sure, the company may suffer slightly in the current economic scenario – who won’t? But "Long term, the company still has a tremendous outlook.  One example, our latest consumer phone survey shows the smart phone market thriving, and among respondents planning to buy a new smart phone in the next 90 days, more than a third (34%) say they’ll get an Apple iPhone – the highest level of smart phone demand in the industry," Carton observed.

"We fully expect Apple’s iPhone numbers will beat consensus estimates on October 21st. However, Mac sales projections going forward are the number one issue for the company, and that’s where our survey results show Apple is vulnerable – caught in the fierce headwinds of the accelerating economic downturn."