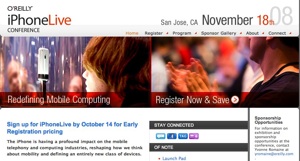 In a move bound to set the scene for another round of Apple-related prognostication, the company is also offering attendees who sign-up for the event by October 14 a discount on the regular price.

Does this connect to other rumoured events on that date?

Probably not, but outside of parts of Apple HQ, no one really knows. But Apple’s recent move to liberalise its iPhone SDK will at least mean developers speaking at the event will be able to go into much more detail on their experiences building applications for iPhone than ever before.

iPhoneLive is the new O’Reilly conference for iPhone developers, entrepreneurs, and enthusiasts, focusing on both the business and development issues surrounding the iPhone platform. So if you build applications or have an idea for a business based on such applications, the show’s the place to help develop understanding of:

– How to capitalize on the explosive growth

– How to build iPhone applications

– The opportunity and reasons behind a native application vs. a web application for the iPhone

– What (and often what is not) the criteria for success, particularly for independent application developers

– Business opportunities for the platform