Steve Wozniak explains why the iPod will die 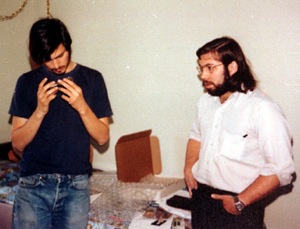 Apple co-founder (in picture to the right, to the left is Steve Jobs) Steve Wozniak warns that the iPod’s days are numbered in an interview with UK newspaper, the Telegraph.

"The iPod has sort of lived a long life at number one. Things like, that if you look back to transistor radios and Walkmans, they kind of die out after a while", Wozniak warned.

"It’s kind of like everyone has got one or two or three. You get to a point when they are on display everywhere, they get real cheap and they are not selling as much," he added.

One way around this inevitable consequence of change may be to slow down, Wozniak advised: "It is time for the whole computer industry to maybe have a bit of a slowdown. For twenty years we have been in this replacement and upgrade market," he said.

Woz was also critical of Apple’s tight control over iPhone development, warning, "Consumers aren’t getting all they want when companies are very proprietary and lock their products down. I would like to write some more powerful apps than what you’re allowed."

There’s also a mumbled future product warning, where Woz, "let slip that Apple’s future could lie in an ‘iWatch’". The Telegraph doesn’t say any more…

So what is the iWatch? We say this fictional product will contain GPS sensing and a colour screen. It will be voice-activated, host a built-in phone and offer email access on the go, (read-only). What would you expect from the iWatch?

(Incidentally, we think the Woz was joking about the iWatch, but there you go.)