iPod, iPhone batteries will be made replaceable under EU law? Not really… 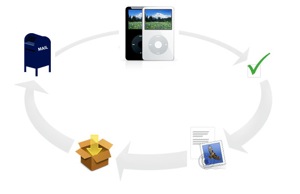 This is revised EU legislation that aims to protect human health and the environment by ensuring waste batteries are properly collected and recycled.

Some reports have claimed the Battery Directive means Apple will in future be forced to make batteries in its iPod and iPhone players user replaceable, but this isn’t the case: Apple is already in compliance with the Directive becuase it takes responsibility for replacement and disposal of old batteries, and already offers a free iPod (and mobile phone) recycling schemes in Europe.

It’s no surprise there’s critical misunderstanding as to the nature of the Battery Directive. Perhaps because many parts of Central and Southern Europe are already suffering early effects of global warming, Europe is years ahead of the US in terms of enforcing environmental legislation. Apple’s stated commitment to catching up and outpacing these considerations in its product design are continuous and well-reported.

Adopted by the European Parliament and Council in 2006, the revised Batteries Directive should be transposed by Member States into national law effective last month, though (as ever when dealing with such things) there’s some tardiness in the application.

s the EU describes the bill, one key change includes a requirement that, in line with the principle of producer responsibility, "battery producers have to finance the costs of the collection, treatment and recycling of waste batteries."

– A requirement that all batteries collected must be recycled (with possible exemptions for portable hazardous batteries).

– A ban on the landfilling or incineration of automotive and industrial batteries.

– A requirement that recycling processes for different types of batteries must meet specified efficiency levels.

The new directive revises an existing directive on batteries from 1991 which has not succeeded in controlling adequately the risks they pose or creating a homogeneous framework for their collection and recycling. For example, almost one in two ‘portable’ batteries (small, sealed batteries, as opposed to industrial or automotive batteries) sold in the EU in 2002 was sent for final disposal in landfill dumps or incinerators instead of being recycled after use. This was the case even for batteries that had been collected separately at the end of their useful life.

Batteries contain a range of metals which are harmful to human health and the environment, including in some cases the hazardous heavy metals lead, cadmium and mercury, all three of which are extremely toxic and likely to leak into environments surrounding places where they’re dumped or disposed.

Dealing with these issues is on the agenda at Apple, with board member and former vice president Al Gore saying in his film, ‘An Inconvenient Truth’, "We’re facing a global crisis and action is required".

As a result, Apple was the first major computer manufacturer to eliminate the use of CRTs in mid-2006 and plans to completely eliminate the use of arsenic (in 2008) and mercury (as soon as technically and economically feasible) in its displays. Apple will completely eliminate use of Brominated Flame Retardants (BFRs) and PVC by the end of this year.  Its "small remaining applications" for beryllium are also "a future target for phase-out,".  iPods and iPhones use mercury-free LED screens, as do some Apple laptops, beginning with the 15-inch MacBook Pro.

In Europe, principal rules that already affect Apple include the Waste Electrical and Electronic Equipment (WEEE) Directive and the Restriction of Hazardous Substances (RoHS) Directive, the latter law caused Apple to end European sales of Airport Base Stations, eMacs and iSight cameras in June 2006.