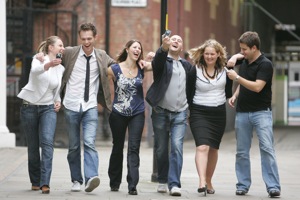 A UK survey has revealed a bundle of interesting statistics concerning the so-called "iPod Generation", with the role of the TV declining in importance as we turn to the internet as the hub of our lives.

Apparently, half of the UK’s 18-24-year olds use social media to share their lives online more than they watch television, according to new research from Flip Video.

Over half (58 percent) of 18 to 24 year olds visit a social networking site every day with 42 percent of 25 to 34 year olds admitting the same frequency.

It could be that the day’s of TV dominance are declining, on news that 61 percent of 18 to 24 year olds and over half of 25 to 34 year olds spend more time online than watching TV.

As a nation, 45 percent of the UK population admit to watching more videos online compared to the last year. 73% of 18-24 year olds and 59% of 25-34 year olds watch videos online at least once a week.

(We think Apple should pay a little attention here and hustle an engineering team to get Safari working on the Apple TV, by the way, a lost opportunity right now – but thanks guys for the eco-friendly ‘off’ button, a welcome feature in the recent software release).

There’s deep creative opportunity in this new mood: 18% of 18-24 year olds and 17% of 25-34 year olds create and share videos online at least once a week. It’s almost like the world has caught up with Apple CEO Steve Job’s vision of the "digital hub" for music, movies and media – iMovie is built for this.

Sadly, dumbed-down celebrity culture has contributed to the phenomenon, as 36% of 18 to 24 year olds and 34% of 25 to 34 year olds "would like to be a celebrity and around 60% of both groups think websites like YouTube have made it possible for anyone to become famous." In a world without riches an egocentric sense of self-achievement appears to be becoming a currency for generation Y.

Ray Sangster EMEA President of Flip Video said: "The so called iPod generation is less interested in what’s on traditional media and more interested in creating their own content and sharing it with their friends."

Naturally, there’s a product release behind the announcement of this research, the Flip Mino, a £119 video camera.