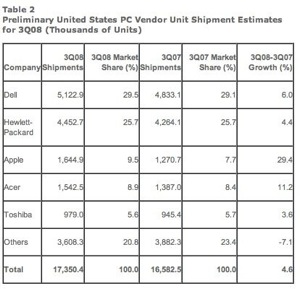 Gartner’s latest figures reveal Apple achieved a 10 per cent slice of the US in Q3 2008 – no wonder Microsoft’s running scared.

The news is that Apple’s share of quarterly US PC shipments shot to 9.5 per cent, up from 7.7 per cent in Q3 ’07. And US shipments increased 29.4 per cent, year-on-year – far, far, far – look really far ahead of total industry shipment growth of four-point-six percent (4.6%).

(Incidentally, some may note that this period includes the release of Vista, which was, erm, meant to boost computer sales, which kind of proves Apple COO Tim Cook’s point, we think).

The rest of the news is a little more lackluster – Apple hasn’t yet jumped into the top five slot for worldwide PC shipments, lagging slightly behind Toshiba with its 4.6 per cent share.