MacBooks, monitors and DisplayPort: a primer 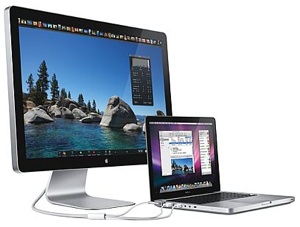 Apple yesterday introduced a 24-inch LED Cinema Display and a range of MacBooks equipped with a Mini DisplayPort, and the company indicated this was a first step in transitioning all its products to DisplayPort. So what is it?

DisplayPort isn’t an Apple technology – it’s an emerging I/O standard that’s designed for video – effectively in the running against HDMI.

DisplayPort was originally developed for computers in order to replace those horrid VGA connectors. It was introduced by the Video Electronics Standards Association in 2006.

We’ve been doing a little reading about it, and came across this excellent article on Electronics Design Strategy News we’d like to tell you about.

Unlike HDMI, DisplayPort is royalty-free. It’s also open, which is probably why Apple like it. HDMI demands manufacturers pay a $5,000-$10,000 annual fee for use of it and a 4 cent per device royalty, despite this you’ll see HDMI in consoles, TVs, DVD players, even the Apple TV.

DisplayPort offers a few advantages though: for example, while HDMI sends each colour over a separate data channel, with another channel for the TMDS clock and two more for device management and control; DisplayPort combines all the a/v and control information into packets, just like a data network. If you like, HDMI is based on old RGB type thinking, while DisplayPort is more like the internet – and therefore more potentially extensible.

Apple has chosen to deploy what it calls Mini DisplayPort, as noted by Electronics Design Strategy News: "DisplayPort enables thinner, smaller-form-factor monitors because the signal can go directly from the PC to the glass in the monitor in direct-drive, end-to-end configurations that replace LVDS with DisplayPort. In addition, the LVDS auxiliary channel is one-way, whereas DisplayPort’s bidirectional channel provides the ability to perform additional functions, such as notebook-backlight control."

So, in other words, the reason the new Macs don’t have HDMI is because it is expensive to deploy and just isn’t as flexible in its deployment as Apple required. DisplayPort is also easier than HDMI to integrate and implement in silicon.

Doug Bartow, strategic-marketing manager for the advanced-TV segment at Analog Devices, who participated in DisplayPort standards development said: "In our view, there are no consumer features in DisplayPort that distinguish it over HDMI,” he says. “As an engineer, I think that DisplayPort is a well-constructed display standard, and, if it were available three to four years ago, we’d all be using it. But HDMI is already here, and it will provide significant headwinds for market penetration of DisplayPort.”

Critics are already muttering disappointment that Apple didn’t include an HDMI port on the new Macs, but perhaps it’s fair to say they haven’t yet familiarized themselves with DisplayPort, which is expected to appear as a port (as HDMI does) by 2010.