Come, take a look inside the new MacBook and MacBook Pro 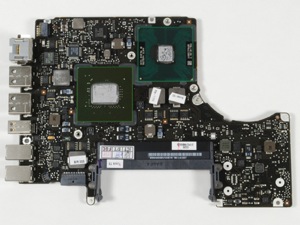 iFixIt have struck again, tearing apart retail models of the all-singing, all-dancing new MacBook and MacBook Pro laptops from Apple, all in the cause of research, natch…And there’s some notes of interest there, for those of us saving our pennies, cents or Yen toward a purchase.

On the MacBook, the intrepid tear-down daredevils admit, “this may be the most beautiful laptop we’ve disassembled. Apple has a right to be proud of their engineers and manufacturing team.” Good praise.

They note the battery indicator light is now mounted on the side of the Mac (with the other I/O ports) which makes it a lot more useful. The battery can be removed by the touch of a latch.

iFixIt’s tear-down revealed the hard drive to be the same as the last black MacBook, a 250GB SATA running at 5,400rpm. They also found the battery to be a 45-watt hour version, rather than the 55-watt hour shipped in the previous version, however it still offers 5 hours of “wireless productivity” and is 200g lighter. On the whole when taking apart the MacBook the engineers said, “It looks like the only really hard part to replace will be the upper case and keyboard.” The processor is a Penryn Intel Core 2 Duo mobile Processor, while there’s also a Cypress USB controller and mixed-signal array. The HD audio codec comes from Realtek. Oh – and the speakers are much, much better.

Moving on to the MacBook Pro, they’ve published a host of images of the exterior and the interior. iFixIt also inform: “We’re noticing a lot of hardware similarities between the MacBook Air, new Macbook, and this MacBook Pro.Apple has taken their new manufacturing approach to heart, and is using the flexibility it provides to standardize as much of their design as possible.” They also call it an “incredible machine”.

– Keyboard repair is more challenging than before;

– Hard drive replacement is much easier on this model than the preceeding one.

– “The interior is cleaner and flows together better than the previous Pro.”

– SuperDrive is SATA, not ATA

– There are 56 screws on the keyboard.