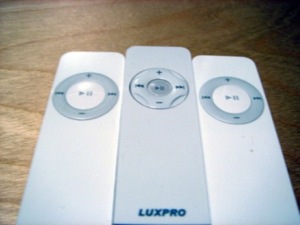 So it seems iPod shuffle knock-off maker, Luxpro (remember them? There’s is the player in the middle of this picture) is suing Apple for “monopolising the MP3 music player market.”

Apple’s also receiving a drubbing for everything else the Luxpro lawyers could think of other alleged offences, including “contract interference, attempted monopolization of the MP3 player market, unfair competition, and commercial disparagement.”

Oh it’s a laugh – I mean – looking to the background of this litigation between Apple and LuxPro you don’t need to be a genius to sense that the latter firm may have been just a little, erm, naive when it introduced its iPod shuffle knock-off similar sized, shaped, controlled and coloured flash-based MP3 player in March 2005 atCeBit (great show, but visiting it is such a drag).

Seems Luxpro didn’t like it that Apple eventually stopped it making and selling its product, accusing Apple of pressurising the company’s retail partners into ceasing sales (ie. Apple probably called retailers and pointed out the legal ramifications of selling a product so closely identical to its own while a case was pending.)

Still, while it may be obvious to us that the Luxpro product looks a lot like the iPod shuffle of the time, seems a Taiwanese judge disagreed after a long legal battle, prompting Luxpro to warn it would attempt to sue Apple. And that’s what’s going on now.

Anyway, whatever the courts decide you’d have to be a no eye’d dear not to see the physical similarity between the two products, don’t ya think?