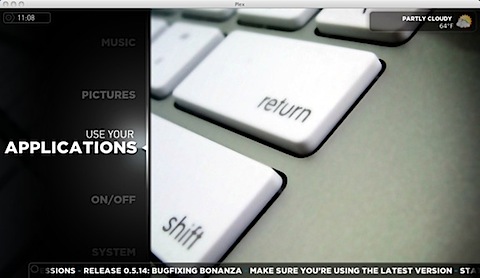 Plex.app hits .71 release this week and continues its ascent to the top of the Apple media center world.  Sure, Frontrow is blessed by Apple.  Boxee has lifted the same XBMC code and gone a different direction.  But, as far as fully funtioning Media Centers go, Plex.app is easily the best, and getting better fast.

This latest update adds support for Aperture library browsing (iPhoto and iTunes has been supported for months).  Not just your Aperture either…but any Aperture out there on the Internet so long as everyone is using Plex.  Support for Adobe’s Lightroom is also on the way.

Recent features include the ability to open any application from Plex’s interface (including FrontRow), iTunes visualizers and playback of DRM tracks from the iTunes store and Sparkle software updates.

Plex Media server, another recent update,  is a standalone program that runs alongside Plex (or alone on any machine, it’s a Universal Binary). It serves up media from your iLife applications and Aperature/Lightroom. Plex communicates with the Plex Media Server on the local machine, on your local network, or even across the world over the Internet. This means that you can play your friends’ iTunes playlists or browse their podcasts or photo albums.

The list really goes on and on.  Plex is everything you’d want in a media center including the ability to browse folders on any system and play just about any type of audio or video file.  Plex isn’t bound by any of the studio deals or format wars Apple software is limited to.

The release can be downloaded via Sparkle (updates), HTTP, or torrent, or built from source.