There are some rumors around the net that can be traced back to the Apple Core about version 3.0 of the iPhone.  The idea put forward was that a quad core processor would grace the next revision of the iPhone.

The ARM architecture for multi-core chips doesn’t even start picking up steam until 2010.  In 2009, the Cortex A8 will continue to gain momentum.  Toward the end of the year, devices based on the A9 single core architecture could start appearing. 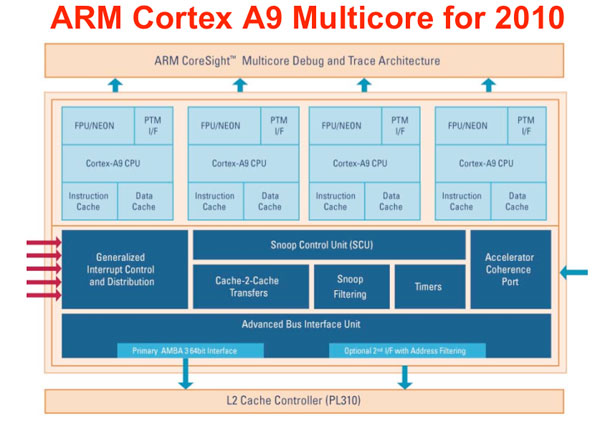 Today, Palm’s Pre announcement included mention that it would have the TI OMAP3430, which is the fastest Processor available for mobile phones right now and it would hit the streets in mid 2009.  It is based on the ARM Cortex A8.  The A9 multi-core is two generations ahead of that.

To be fair to the Apple Core, they weren’t really giving time-lines or specifically anything about the ARM chips that go into the iPhone.  Would the graphics chips be quad core?  Maaaybe.  But probably not.

From TG Daily (RE: Imagination Chips)

I have said it before and I said it again: GPGPU acceleration may turn into the most significant hardware and software advances in decades and to see that technology emerge on the cellphone as well is exciting. However, Imagination has just begun to license the 543 design, which means that it will take about 18 months for phones that are equipped with the chip to become available for sale. The next iPhone may not get this chip, but rely on the current SGX version (which is a significant step up from the MBX chip.) But two generations out, the 543 could be a stunning platform and the iPhone may run applications you can only run on your PC today.

Will there be a quad-core iPhone?  Probably, in 2010.  Will you see it in 2009?  Not very likely.  Start thinking about Cortex A8 (no slouch) around, say July or earlier if we are lucky, depending on how long it takes PA Semi to crank out their version.

Don’t believe me?  Do a Google search.  If anyone can find any roadmaps with multi-core Cortex A9’s in 2009, we’ll put it up. 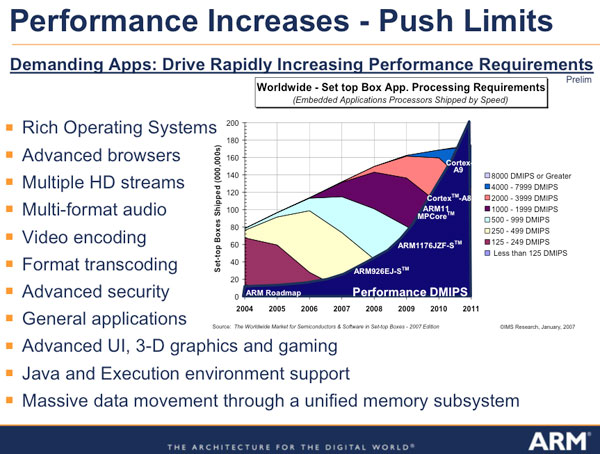