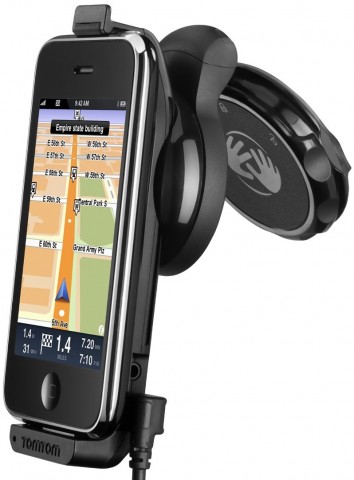 for iPhone solution may finally reach stores next month, as the company plans a special media event on September 22, a report claims.

As noted by MacRumors, Dutch site Bright.nl disclosed TomTom to have distributed press invites for the media event in a recent Twitter post.

The invitations, distributed to local journalists, say: “TomTom will reveal the future of navigation to you" on Tuesday, the 22nd of September (from 10:30 am until 2 pm) … Save the date!”

As we revealed last week, UK retailer Handtec prematurely leaked the local £99 price of the TomTom for iPhone system.

The system includes a windscreen mount, iPhone charger, amplified speakers, a hands-free kit and a GPS dongle. It also features a navigation application for iPhone; an Apple version of TomTom’s award-winning turn-by-turn navigation software, including IQ Routes and latest maps from Tele Atlas.

Some may recall the heady days of early this year, when colleague Cleve Nettles revealed a job ad from TomTom, seeking an iPhone/Mac OS developer. This caused us to speculate at a TomTom for iPhone

solution then. And judging from the interest surrounding the product, we think the Dutch firm may have a winner on its hands on the product’s release.

If there’s any TomTom PR people out there, we’d like to take a look at your solution.