Is the antenna issue a dealbreaker for Apple?

The iPhone 4 antenna issue is a very real one for Apple.  While no one is certain what is causing the issue, it appears that when held with the left hand, assumedly connecting the two antennas, the signal drops significantly, often cutting off data and any phone calls.

I’m visiting Ohio for my brother’s wedding and I can reproduce this just about anywhere I’ve tried.  It is very real, at least on my iPhone in this town.  I can do it with dry hands and other people I’ve let test it can also reproduce it.

(BTW, AT&T service here overall is insanely great compared to the New York City area, it is like a whole other experience.)

Macrumors is doing a poll and it appears that significantly over half of iPhone 4 users are having this issue.  This is no joke and a significant issue for Apple. 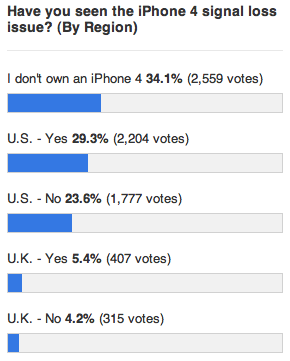 Some have suggested that a software update may be able to help.  That seems unlikely, however, as it appears to be a hardware problem.  Maaaybe a baseband update could solve the issue if it is related to switching channels due to interference, but that is just a hopeful guess at this point.

Steve Jobs’ suggestion that people are holding it wrong isn’t going to please those above.  A free protective case might make sense for some, but it adds some bulk to the product which is otherwise wouldn’t have (and can Apple still say that its iPhone is as small as it is if it requires a case?).  With the case, the iPhone 4 no longer fits into docks either, which is a pain.

Could Apple have missed this issue entirely because their test units were wrapped in case disguises?  Were all of their testers righty?  Has AT&T artificially pumped up its service around Cupertino so much that it went un-noticed by Apple’s testers?

Could Apple be looking at a recall issue here?   It will be interesting to see how it all pans out.