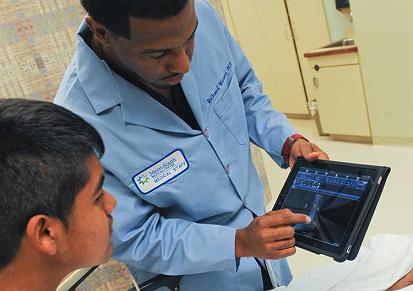 Yet more signs on the glorious march of the iPad as US emergency room doctors begin using the devices to order lab tests and medications; and other medical pros find other ways to deploy the Apple tablet.

Author Ad Placeholder
Will only appear on redesign env.
Chicago area doctors are increasingly using iPads as medical tools, accessing medical records, showing X-rays and other lab tests and more. A report from Chicago’s Sun Times tells us that next month, the University of Chicago Medical Center plans to provide iPads to all of its internal medicine residents, expanding on a pilot program launched earlier this year.

These are just some implementations for the device in the medical markets.

“Another hospital that has embraced the iPad is MetroSouth Medical Center in Blue Island. Once doctors there learned that they could access the hospital’s electronic medical records with the iPad, “it went through here like wildfire,” said Dr. Richard Watson, an emergency room physician at MetroSouth. “At least half of our staff here in the emergency room has their own iPad and carries it and uses it.”