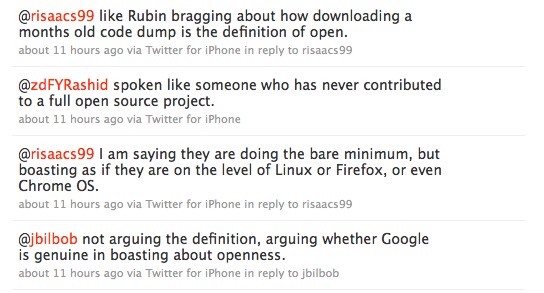 Developer Joe Hewitt scored acres of anti-Apple coverage when he slammed the company for its closed iOS development environment — I wonder, then, just how much coverage his latest rant will achieve now Hewitt is slamming Google for claiming Android is “open”, when it isn’t really.

At the center of Hewitt’s argument is that Google’s Android code — which claims to be open in the same sense as Firefox or other open projects — isn’t really developed in the same way. That’s because Google keeps code development of the OS in house until it is ready to release it.

In a series of Tweets last night, Hewitt slammed Google’s appropriation of the “open” claim for a product that isn’t truly open.

Hewitt kicked off his series of tweets with a question: “How does Android get away with the “open” claim when the source isn’t public until major releases, and no one outside Google can check in?”

“For those who aren’t familiar with Android’s release cycle, Hewitt is referring to the fact that developers can’t take a look at the current version of the OS as it’s being developed. Instead, they have to wait for the Android team to finish the latest release internally, at which point Google releases the code to developers (and carriers begin to deploy it to handsets a few weeks later). This process stands in contrast with many other popular projects that are considered to be ‘Open’, which allow developers to access the code as it’s being written, and in some cases, to check new code in themselves.”

Hewitt’s claims continue, with one in particular striking home:

“@risaacs99 I am saying they are doing the bare minimum, but boasting as if they are on the level of Linux or Firefox, or even Chrome OS.”