Jobs: There won't be a 'mute-switch becomes an orientation lock' option for iPad 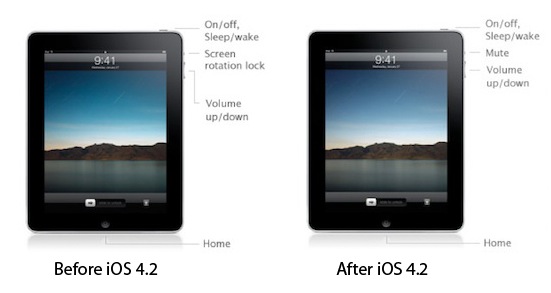 Back in January 2010 Apple announced that the hardware switch on the side of the iPad would be a mute switch, just like on the iPhone. Then, closer to the product’s launch in March of this year, Apple revealed that the mute-switch magically transformed into a very handy orientation-lock. Now with iOS 4.2 for iPad, Apple again transformed the hardware switch’s purpose and now it is once again a mute-switch. As we now know, you can lock the iPad’s screen orientation via a menu to the left of the multitasking dock.

Since Apple is clearly able to change the switch’s purpose via a software update, many have wondered if Apple would make an option in settings for the user to choose whether they want it as an orientation lock or as a mute switch. Well today, we have the answer and it comes straight from the top. Reader, Robert Novak, sent an e-mail to Steve Jobs asking:

In IOS 4.2 for iPad is the switch on the side going to be the mute and not screen orientation lock from now on?

After getting a classic thumbs up from Jobs:

Sent from my iPhone

Robert asked him if this would be an option for the user:

Are you planning to make that a changeable option?

So there you have it. Your mute switch with iPad 4.2 will seemingly never be an orientation lock again, according to Jobs.