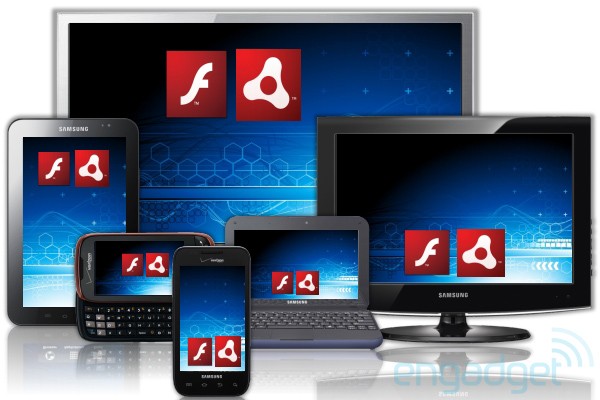 There’s yet another player offering converged solutions for mobile devices, tablets — even TVs — Adobe has entered the fray with the release of Adobe AIR 2.5.

Famously, Apple CEO urged Adobe to develop and implement better mobile solutions within his open letter on Flash, which ended with the admonition that, “Adobe should focus more on creating great HTML5 tools for the future, and less on criticizing Apple for leaving the past behind.”

Apple’s recent move to offer support for apps ported to iOS devices from Flash using Adobe’s Flash-iOS export tools does mean that apps build using Adobe AIR 2.5 will be supported on iOS devices once exported in the appropriate format. There’s a list of such apps here.

Air 2.5 supports accelerometers, multi-touch gestures, cameras and microphones, GPS data and hardware acceleration in a variety of silicon. Adobe also intends offering apps for sale via its own marketplace.

Device manufactures Acer, HTC, Motorola, RIM, Samsung and others are expected to ship the AIR runtime pre-installed on a variety of devices including tablets and smartphones later this year and early 2011.

In a move many believe will have some impact on the Apple TV, Samsung SmartTV will run Air 2.5 apps when it launches in early 2011.

Adobe AIR 2.5 and the Adobe AIR 2.5 SDK for Android and desktop operating systems including Windows, Macintosh and Linux are available today.