Geekbench did some benchmarking of the new Airs vs. MacBook Pro 13-inch and older Airs and got results similar to what you’d expect.  While those 1.4GHz 11.6-inchers are uber-tiny, they unsurprisingly aren’t anywhere near as fast as the 13-inch models at higher clock rates: 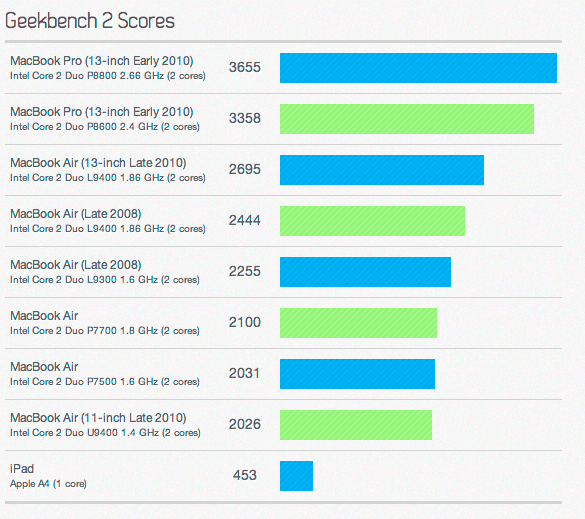 Geekbench’s scores don’t take in consideration the increased speed of the new Nvidia video cards which will only further distance the current lineup from Airs of old.

There are two ways you can look at the new 11-inch MacBook Air; it’s either a much smaller but slower MacBook Pro, or a much faster but larger iPad. The 11-inch MacBook Air is small enough that I’d consider bringing it instead of an iPad, but I’d worry it’s not fast enough (or have enough screen space) to be my primary laptop.

The 13-inch MacBook Air is a much more straightforward produc; it has 80% of the processor performance of the latest 13-inch Pro, making it an acceptable substitute for users looking for a slightly more portable Pro.

Speaking of old Airs, check out these two idiots: