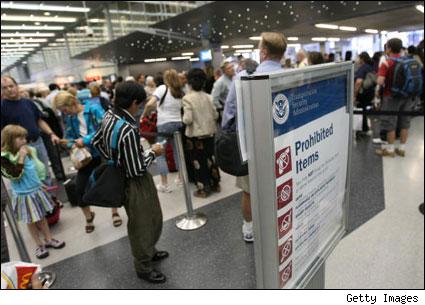 Just like the iPad and those tiny underpowered netbooks out there, the 11″ MacBook Air has been cleared to go through Airport security in the US without being taken out of its bag.

Apple may wish to avoid comparisons of the MacBook Air to similarly compact but underpowered netbooks. However, like netbooks, Apple’s new laptop is “smaller than a standard-size laptop,” meaning it can stay in a bag, said TSA spokesman Nicholas Kimball.

The rules on whether the larger, 13-inch MacBook Air — thinner than most laptops because it doesn’t have a DVD or hard drive — would need to be placed on the conveyor belt separately have not been established, Kimball said.

In related news, the head of British Airways said that…

the practice of forcing people to take off their shoes and have their laptops checked separately in security lines should be ditched.