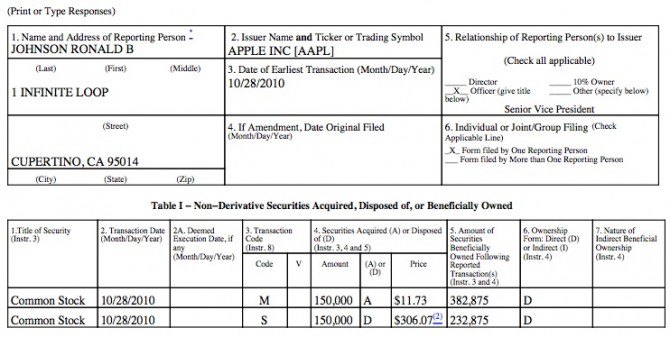 Johnson, who has been responsible for Apple’s explosive retail store success, sold his shares at an average $306.07 per share, according to a SEC filing.

Johnson led Apple’s deployment of retail stores across the US and later internationally. The stores opened for business at a time during which other retailers were suffering, with computer retailer Gateway disapperaing from streets.Industry observers then didn’t believe the retail chain would succeed.

The stores succeeded, with Apple now planning to open up to fifty more in the coming financial year. Around half of all Macs sold in retail stores are being sold to users new to the platform.

Apple opened 24 stores during the just-gone September quarter, 16 of which were outside the United States, including stores in Beijing, Shanghai, London and Paris.

“Our new Beijing and Shanghai stores opened on the last day of the quarter, and first-day sales from both stores exceeded all previous store openings. Our four China stores are our highest traffic stores in the world and are among our highest performing,” Apple CFO Peter Oppenheimer said during Apple’s most recent financial call.

Apple has 317 stores worldwide, with 84 outside the US. Average revenue per store was $11.8 million.