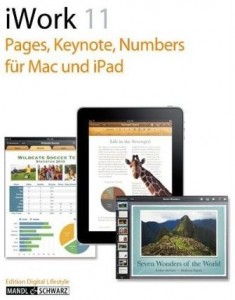 We had kind of expected iWork 11 to make its first appearance alongside iLife 11 last month. It didn’t, but it looks like Apple’s productivity suite is on the way, it could even ship next month.

Eagle-eyeed Mac sleuths over at Apple Bitch have noticed that an iWork book has appeared on Amazon France as well as a Swedish book site.

“While the cover of the book is only displayed on the Amazon site, it appears to be comprised of three images used by Apple to publicize iWork ’09 for iPad.  The book itself is described as 320 pages in length and will apparently be published by Mandl & Schwarz Verlag in December 2010.”

In July, Amazon published details of a book about iWork 10 (written by Giesbert Damaschke) on the French Amazon store, this was listed then as due to ship in October, but the new version of iWork didn’t appear then.

Reading these signs and portents, then, it seems the stage is set for the introduction of iWork 11, perhaps this month.