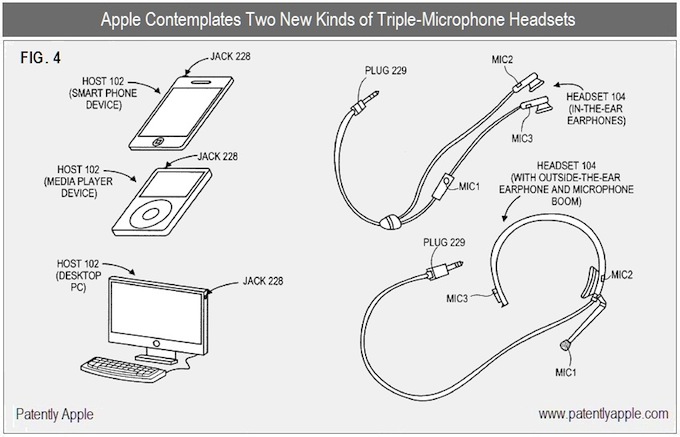 Patently Apple reports that Apple today published patents for two new headsets both with triple microphone action. Having two microphones on the iPhone 4 is already helpful, but three on a headset would be amazing and of course magical.

One way to improve the performance of sound capture by the headset during a two-way communications or phone call application is to capture the near end user’s speech using multiple microphones. This arrangement is also referred to as a microphone array. The processing of microphone array signals improves the SNR of the resulting microphone signal, by spatially filtering the ambient sound field around the near end user. In other words, the array is “pointed” toward the signal of interest, by emphasizing contributions from the better placed microphones while deemphasizing those of the poorly placed microphones. Microphone array processing may also be used in conjunction with a noise cancellation algorithm to more effectively reduce the ambient noise that is captured by the microphones.

One of the headsets Apple is patented even reportedly includes a small boom and this would be extremely helpful. Users can use their microphone-equiped headsets for so many functions on iOS devices including phone calls on iPhones, FaceTime, voice recording, video recording, and of course Voice Control – which I never used. Getting into the design of these headsets, if you look at the image above you will see two different ones. The first looks nearly identical to the Apple earphones today and the second/bottom design looks like its straight out of 1999 with the external mic hanging on the side.

Check out the patent in its entirety at Patently Apple.