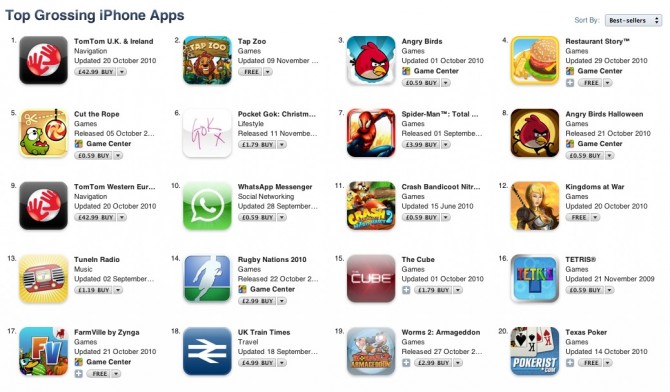 There’s money in free. Please, bear with me, it may sound counter-intuitive, but why else are one-third of the top-grossing iPhone apps made available via the App Store free apps?

In-app purchasing has opened up new opportunities to developers to entice users with quality apps for free (the carrot) and then to upsale new features, layers, levels or any other conceivable kind of virtual good (I bought an obelisk once) via in-app purchasing, GigaOm tells us.

And it works, as is made clear through a scan at the top-grossing list. Around a third (it varies by geography) of the top money makers are being given away.

In January, there were just two freemium iPhone apps in the App Store among the top 50. The renaissance in in-app purchasing kicked-off in mid-summer.

It isn’t just games — there’s apps for social networking, sports, newspapers, magazines and more, all offering in-app upgrades. iPad isn’t quite the same at this stage — none of the top 100 iPad money-earners are free.

GigaOm closes with the following thought for the day, “Free can definitely pay the bills and more.”