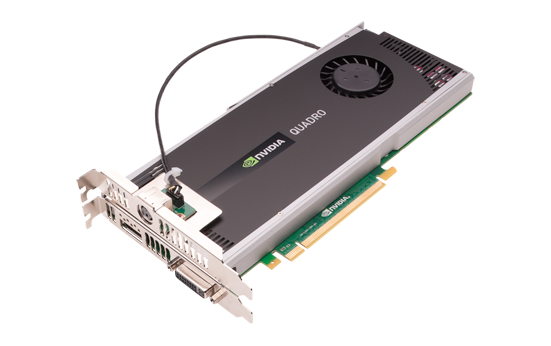 NVIDIA has announced a new graphics card for the Mac Pro, the Quadro 4000 — a solution which brings nVidia’s advanced Fermi architecture to the platform.

“The NVIDIA Quadro 4000 graphics processing unit (GPU) for Mac is optimized to accelerate workflows and drive a range of top professional applications. For example, the Adobe Mercury Playback Engine in Adobe Premiere Pro CS5 software leverages NVIDIA CUDA parallel processing technology to enable film and video professionals to work unconstrained. Other examples include visual effects and image processing applications from The Foundry, including NUKE and STORM, and MATLAB from MathWorks.”

The Quadro 4000 GPU for Mac also provides additional display flexibility through a DisplayPort and a DVI-I (Dual Link) connector built into its bracket, and a 3D stereo bracket for optimal stereo connection to the system. A DisplayPort to mini-DisplayPort cable is also included to enable mini-DisplayPort only Apple displays. Additionally, users can enable up to four high resolution displays from a single Mac Pro using dual NVIDIA Quadro 4000 for Mac boards.