There are probably more than a few of you out there that want to see a quadricopter under the tree this year.  Press release below: 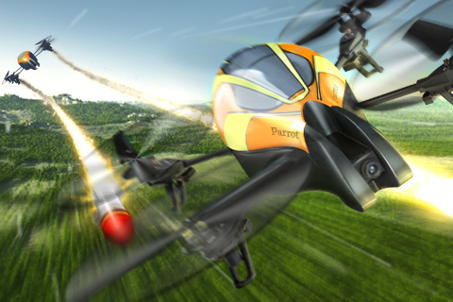 Parrot has announced the first augmented reality game for the iPhone-controlled quadricopter, the AR.Drone.

The new game, AR.Pursuit, is a two-player game where AR.Drones can shoot at each other in a virtual world on their iPhone screen. When they are hit by opponent fire, the AR.Drone will physically react to the hit.

AR.Pursuit will be available in the App Store at the end of November.  Full details on the game are in the press release below and a video demo is available.

SOUTHFIELD, Mich., Nov. 18, 2010 — Parrot, a global leader in wireless devices for mobile phones, announces the availability of AR.Pursuit, a game in augmented reality that takes advantage of the exceptional technical and flight capabilities of the Parrot AR.Drone.
Available end of November in the Apple App Store, AR.Pursuit enables players to measure and challenge their piloting skills.
The rules of the game
AR.Pursuit is a two-player pursuit game, where a player has to escape from the other one, as in the game of cat and mouse.
The “pursuer” has two kinds of virtual weapons to reach its opponent:
–          Automatic machine gun: as soon as the frontal camera detects the pursued AR.Drone, bullets are automatically sent in order to slow it down. When it is hit, the AR.Drone will physically ‘react’ to the attack and the escape maneuvers will be more difficult for the pilot.
–          Missiles: when the opponent is locked on the screen, the pilot of the pursuer AR.Drone has to  shake his/her iPhone/iPod touch/iPad to send a missile.
When it is hit by a missile, the “pursued” becomes “pursuer” and so on. At half time, the roles are automatically reversed. The winner is the player who has the longest escape time during the entire game.
A technological first
Once the Bluetooth of the iDevice is on, each player connects to his/her AR.Drone in Wi-Fi and launches AR.Pursuit.
One of the players selects the “create” option on the main menu and indicates his/her opponent’s color and type of hull (indoor or outdoor).
The second player selects the “join” option in the main menu and also indicates the characteristics of his/her opponent. Then the game can start.
Each player can see on the screen of his/her iPhone/iPod touch/iPad what the AR.Drone is seeing. Each action, a shoot received or launched, will also be visualized on the screen via the magic of augmented reality.
Note: If the game is played with indoor hulls, players should place the colored stickers (sold with the AR.Drone) on it.
AR.Pursuit is an enthralling game that makes the most of the extreme maneuverability and stability of the AR.Drone, and which dives the players into a world where real and virtual are mingling… A first!