ChangeWave’s latest survey of more than 2,800 consumers shows the Amazon Kindle (47%; down 15-pts) is hanging on to a rapidly diminishing lead over the Apple iPad (32%; up 16-pts) among current e-Reader owners. However, the iPad’s share of the overall market has doubled since the last time ChangeWave surveyed e-Reader owners in August.

The rest of the market includes the Sony Reader (5%) and the Barnes and Noble Nook (4%). 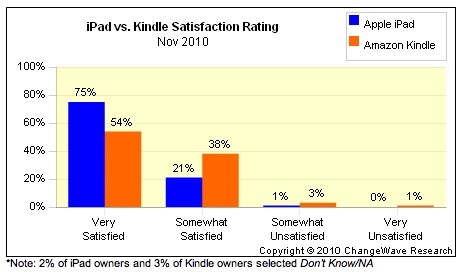 5% of respondents saying they are Very Likely to buy an e-Reader and 10% Somewhat Likely over the next 90 days.

ChangeWave’s survey shows the Apple iPad will be the biggest beneficiary of the expanding e-Reader market this holiday season, ChangeWave said.