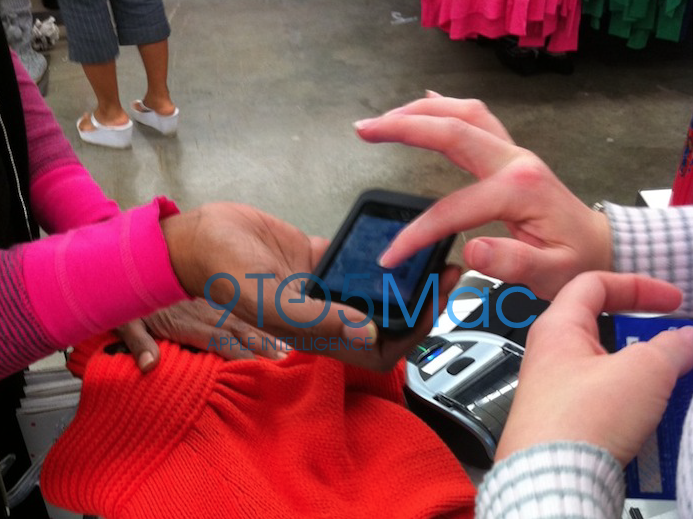 Late last year there were rumors that Apple would release their EasyPay point-of-sale system as a commercial product to third parties. Last month Apple’s first customer, Gap Inc’s Old Navy subsidiary began piloting them.  We’re told there is one per store and they are kept in a safe when not in use.

The two Bay Area companies have had strong ties at the top with Gap’s former CEO Millard Drexler sitting on Apple’s Board since 1999 and Steve Jobs sitting on Gap’s from 1999 to 2002.

The image above is a customer checking out at her local Old Navy store via the Apple-developed point of sale system. Specifically she is signing for her purchase with her finger.

To be clear, we’ve been told this is an Apple PoS (not one of many third party systems that use an iPod to make transactions) software system but rebranded ‘ZipCheck’ for third parties.  The Linea-pro sleds are built by a third party.

The Apple PoS system prints customer’s receipts wirelessly to stationed printers throughout the retail stores (like at Apple stores) and apparently some employees are wearing mini-printers on their belts. According to some Old Navy employees the Apple POS system is perfect for the holiday sales rush as the device’s portability cuts down lines and is simply more efficient for everyone.

A Gap. Inc. spokeswomen confirmed Apple’s new business for us with the following statement:

Since they pioneered the EasyPay system in late 2009, Apple has had a tremendous success with it at their retail stores and is now finally extending this technology into new markets, starting with Gap Inc.

Author Ad Placeholder
Will only appear on redesign env.
Thanks Anon tipster for the lead!