What replaces the Xserve?

Apple caused quite a stir when it announced the discontinuation of its Xserve line on November 5th.  Mac IT departments immediately went scrambling for new solutions.  Apple officially offered up a faster Mac Mini as a low end replacement and the Mac Pro as a high end replacement, both with Snow Leopard Server installed.  IT professionals who maintain data centers small and large know that these aren’t complete solutions compared to the density of the Xserves.

So, what is everyone doing?  CNET quotes the Enterprise Desktop Alliance that says about a third of Xserve shops will be migrating to other hardware within the year.  That reaction might be a little extreme for Apple because we’ve heard that Apple has been sending out reps to quell the exodus. 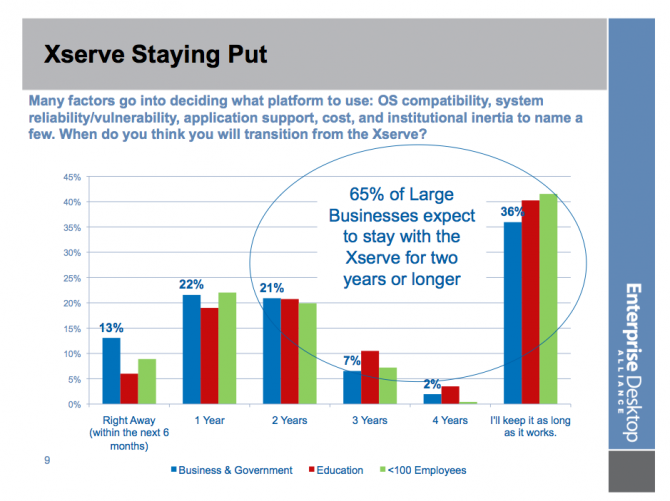 One Apple Enterprise shop we spoke to said that Apple’s System Engineers have been on a campaign to assure that Apple has another solution in the pipeline beyond what they’ve announced.  There wasn’t an exact timeline of release but there was an indication that when the Xserve inventory runs out, the new product will be released.  That means a new Enterprise product could be ready in February.

We’ve got nothing beyond that, but there are a lot of new variables in the ecosystem.  Apple builds its own efficient A4 processors now which, running in parallel, could match the current Xserve performance without using nearly as much power.  Apple is also building a data center in which it could offer enterprise cloud services.

Finally, Lion is due later in 2011 but it isn’t yet guaranteed that Apple will continue to build Server versions of the Mac OS.