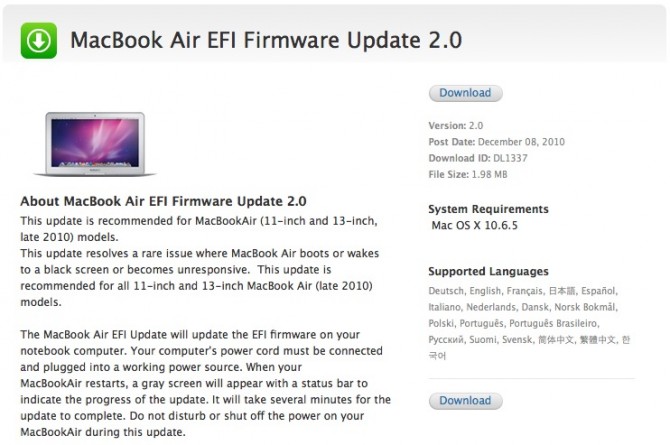 Apple has patched a problem which afflicted some MacBook Air displays, in which 11- and 13-inch models would wake to a black screen or become unresponsive.

The company recommends all MacBook Air users should install the update, which addresses that problem of flickering horizontal lines sometimes appearing on the display of the 13-inch model or displays being discoloured when waking from sleep.

The problem generated some hiatus on Apple’s own discussion forums, and while the company never acknowledged the matter an internal memo did confirm it was aware of the problem.

“The MacBook Air EFI Update will update the EFI firmware on your notebook computer. Your computer’s power cord must be connected and plugged into a working power source. When your MacBookAir restarts, a gray screen will appear with a status bar to indicate the progress of the update. It will take several minutes for the update to complete. Do not disturb or shut off the power on your MacBookAir during this update.”

Get the update here, or via Software Update.