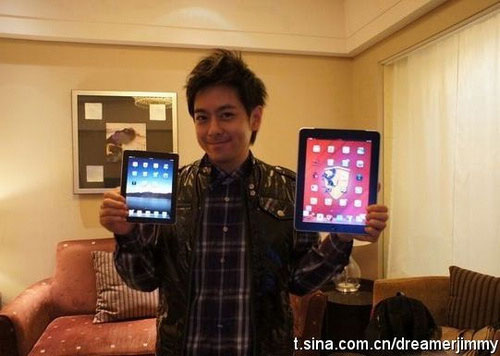 From the “I can’t believe this ain’t viral advertising” dept comes the heart-warming tale of Taiwanese pop star, Jimmy Lin, who has posted a pic of himself holding a proper iPad along with a device he claims is the first prototype of an  iPad mini.  (It’s not).  Never mind Steve Jobs recently said that seven inch tablets are “dead on arrival” and that you’d need to sandpaper your fingers down to use them…

Now, we’re not saying we don’t believe Mr. Lin, though we don’t, but we’d have to ask how a Taiwanese pop star would get his hands on such a device.  He’s also a racing driver and founder of a tech firm –maybe that helps. More on Jimmy’s blog.