Sightings from the Mac App Store

We just got our hands on some information about the upcoming Mac App Store. First here’s a screenshot of the login page you will need to pass through in order to download apps. What’s interesting based on the description is that you will be able to use your Apple Account, iTunes account, or MobileMe account to download apps. 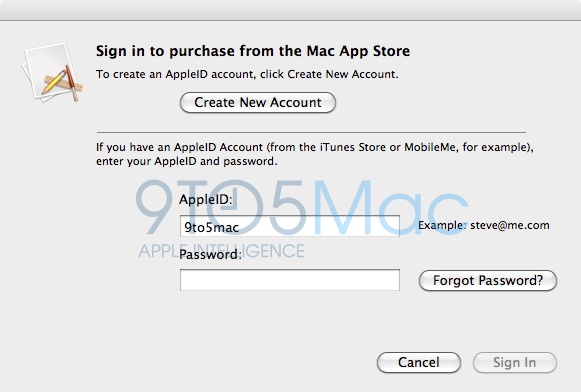 Next, the Mac App Store will have parental control preferences as well as age ratings that are similar to those found on the iTunes App Store for iOS devices:

As you can see in the parental controls code above, the controls will be available directly through the Mac App Store app and not through your Mac’s System Preferences application. The controls will let you block games for certain age groups (over four, over nine, over twelve, or over seventeen).

Here’s a picture of the Mac App Store sitting nonchalantly in on a Mac OS X 10.6.6 dock.

The Mac App Store will have a behind the scenes app called “Store Helper” which will make sure everything gets installed (and charged) correctly.

You saw the Mac App Store icon above in a dock but here’s the full 512 x 512 version for you pixel fanatics (and iTunes 10 icon haters).

As we recently reported the Mac App Store will not feature in app purchases or Game Center support. Also, Mac OS X 10.6.6 will let you search for apps needed to open unsupported files. We also got official word that there won’t be any universal binary deal with iOS and Mac apps. The two systems don’t align in terms of app compatibility.