According to multiple users expressing their frustration through Twitter, come New Years 2011 (where ever you are) your iPhone alarm clock won’t function correctly. You may recall a similar bug in iOS when daylight savings time switched on but this is exactly the opposite. This New Year’s 2011 iPhone alarm clock bug shows its face to users without recurring alarms.

This means that anybody who sets an alarm just for tomorrow won’t be woken up by the iPhone’s built-in alarm clock application. To avoid this issue you need to set a recurring alarm by tapping repeat to select the days you want the alarm to go off on. Apple is yet to say anything and it is still unknown whether this is iOS 4.2.1 only or if it affects past system versions too. Be sure to tell everyone you know with iPhones! (via Engadget)

Update: We just ran a few tests and the above iPhone alarm clock issue fixes itself on January 3rd. You should follow our steps to avoid the issue above until then. Reader Aaron F. has let us know that the issue is occurring on his iOS 4.1 iPhone 4 as well (iOS 4.0.2 t00). Let us know if you see the issue on anything earlier. The issue does not appear to be present on iOS 3.x devices. 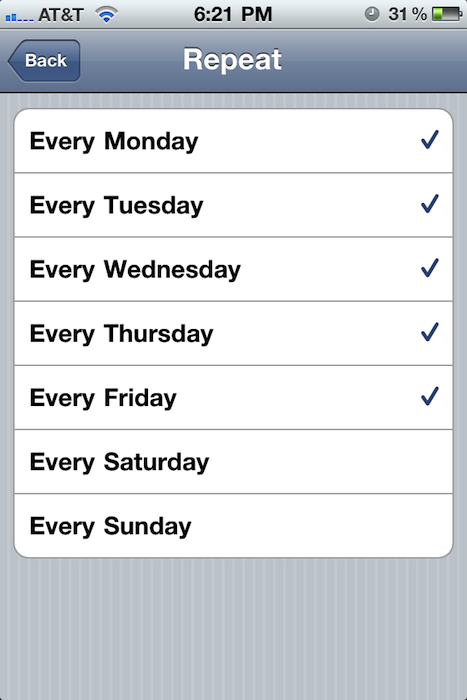