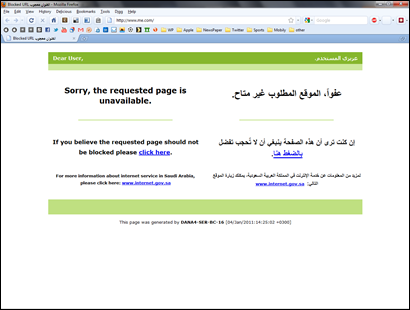 Apple’s dreams to offer enhanced cloud-based services will have to negotiate a dizzyingly irritating range of repressive national governments, with Saudi Arabia now revealed as the latest nation state to have blocked access to MobileMe accounts. A report on local Arabic Apple website, Apple-wd, claims Saudi authorities today began blocking access to MobileMe, with no reason given. (Translation).

Many Apple users rely on the service for their email and contact details.

The Saudi move comes scant months since government there threatened to forbid Research In Motion BlackBerry users access to services.

Governments in the Arab world want access in order to monitor emails despatched using such services in order, they say, to guard against terrorism. RIM and Saudi authorities ulitmately reached a compromise.

Are you in Saudi Arabia? Has your MobileMe access been blocked? Let us know in comments below.