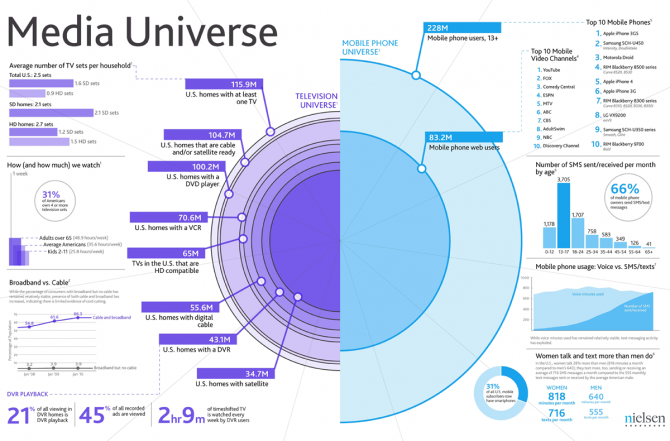 Welcome to the new media order, as described by Nielsen — a new world in which US mobile phone Web users almost eclipse the number of US homes with a TV; a world in which Apple’s iPhone accounts for three of the top ten smartphones used and more.

The graphic above shows us 31 percent of all US mobile subscribers now have smartphones. It also confirms that voice is no longer the cash cow the carriers once enjoyed — these days we send SMS messages to keep in touch.

The Top 10 mobile phones section is interesting too — Apple’s iPhopne 3GS is the top device, followed by devices from Samsung and Motorola and tailed by the iPhone 4 and then iPhone 3G. RIM, LG, Samsung and RIM (again) top out the ten.

What does this show? It is possible you could argue the iPhone 4’s relatively low position in the top ten confirms Apple took some sales damage with ‘antenna-gate’, but we’ll know more on this next week when it publishes its Q2 results. Could any delays reflect the company’s focus on Lion and a determination to seed its developer community with 3D expertise?

Also worth pondering: is Apple planning a later release of its iPhone 5? “Apple has just launched iPhone 4 and is unlikely to launch iPhone 5 until mid-2011 or even later,” a report on Digitimes notes. Could the next iPhone ship later than June this year?