Verizon iPhone 4, inside the FAQ 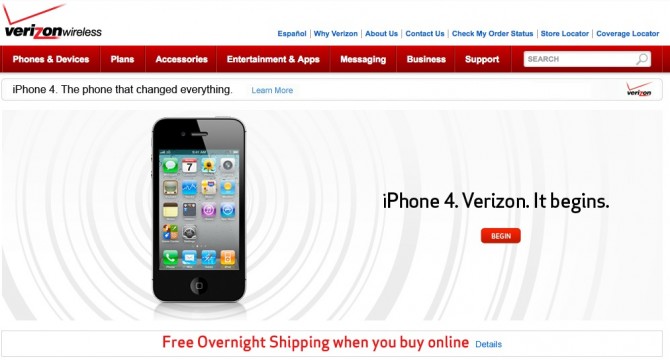 Alright folks, the waiting is over and it has been confirmed — the iPhone 4 is coming to Verizon — the result of a two-year strategic consultation between the firms.

It will be available on pre-order (online only) to existing Verizon customers from February 3. Everyone else will be able to pick one up from Feb 10.

As predicted, this iteration of the iPhone 4 on Verizon works on Verizon Wireless’ 3G network, not the 4G LTE network (yet).

What’s thrilling here is that Verizon is playing the card AT&T consistently did not — you can use your iPhone as a mobile hotspot for up to five (count them — five!!) devices. This is a big deal and is going to rapidly increase that ATT churn rate. However — be warned — there remains a certain ‘opacity’ about whether this feature will be for a fee or for free, as Verizon’s keeping its calling plans close to its chest.

However, optimism that Apple and Verizon might have got past the CDMA limitation which means you can’t “do” data while making a voice call proved misplaced — that limitation remains. The move to CDMA also means many US travelers visiting Europe with their shiny iPhone may face challenges keeping in  touch with home because of network incompatibilty…

I also note that the App Store is directly supported on the Verizon network — there had been some speculation that carrier was demanding a slice of App Store revenue. The iPhone 4 will be able to get Verizon apps, such as VZ Navigator, and V CAST Media Manager.

The iPhone’s being sold with a 2 year agreement — however, you will also have the option to purchase iPhone at full retail price, which will not require you to sign a long-term agreement.

Beginning on February 10th, you can visit an Apple Retail store to purchase and activate. However, prior to visiting, please make sure to check your upgrade eligibility if you are an existing Verizon Wireless customer.

“We are pleased to introduce millions of wireless users to the industry leading iPhone 4 on the nation’s most reliable network,” said Lowell McAdam, president and chief operating officer of Verizon. “This is an important step for the industry as two great companies join forces to give wireless customers one of the most important technological additions to the mobile landscape this century.”

“Verizon Wireless customers have told us they can’t wait to get their hands on iPhone 4, and we think they are going to love it,” said Tim Cook, Apple’s chief operating officer. “We have enormous respect for the company Verizon has built and the loyalty they have earned from their customers.”

A note on Verizon’s iPhone 4 FAQ tells us: “Do you anticipate high demand for iPhone 4?

“We do expect that iPhone 4 will be in high demand. In the event that iPhone 4 is not available in stores after February 10th, you can place your order in store and have the phone shipped directly to your billing address. Shipments will take place on a “first come, first serve” basis. No billing will take place until shipments are made.”

Another note confirms the following:

Can I use my iPhone 4 while traveling abroad?

Yes, customers can use iPhone for voice and text in over 40 countries with data service in over 20 countries.

I’m attempting to clarify which countries are covered.