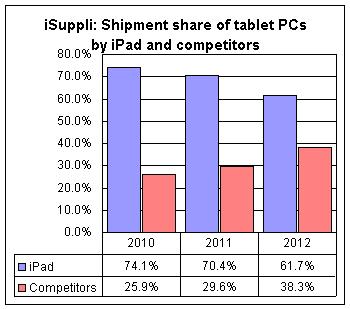 The rush to build tablet devices to compete with Apple’s iPad is posing unexpected strain on component suppliers, a report explains, challenging those in the value chain to focus production away from existing products to meet expectations of non-iPad tablet sales which insider sources report may turn out to be “unrealistic”.

Component shortages are part of the story, but suppliers are equally concerned to avoid over-supply, as both will damage inventories and margins. All the same, global tablet shipments are expected to triple this year, reaching 57.6 million units up from 17.1 million mostly iPads last year.

Apple will retain market dominance with 70.4% share of tablet shipments next year, though it will face mounting competition — despite this it is expected to dominate tablet sales for the next two years.

“IHS believes that as these iPad competitors turn their focus to tablets, the demand for netbook and notebook displays will soften,” said Joe Abelson, VP of displays at IHS.

“And because the tablet market is so new and volumes are unpredictable, display suppliers will be forced to gamble production capacity on the unrealistically high projections of their tablet customers. With different panel sizes and specs in play, the industry should expect to see significant inventory shortages and excesses to occur at the SKU level throughout 2011, potentially accompanied by heavy discounting or scrapping of unused displays.”

“Such disruption should not come as a surprise given the revolutionary impact of the iPad on the global technology market. Not since the dawn of TV in the 1950s has another electronic device so effortlessly captured the hearts, minds and discretionary spending of so many consumers,” reports Digitimes.