Apple is screwing your iPhone: what the issue is is that Apple is quietly moving to a new kind of tamper-resistant screw on its iPhone to keep you out, as iFixit explain in the video above. (And indeed as our own Mark Gurman spotted first way back in November).

Writing on the team blog, the intrepid disassemblers note, “This is not a standard Torx, and there are no readily available screwdrivers that can remove it. This isn’t the first time they’ve used this type of screw—it first appeared in the mid-2009 MacBook Pro to prevent you from replacing the the battery—and Apple is using a similar screw on the outer case of the current MacBook Air. This screw is the primary reason the 11? MacBook Air earned a lousy repairability score of 4 out of 10 in our teardown last October.”

Apple’s service manuals refer to these as “Pentalobular” screws. They are not security Torx screws. It is next to impossible to get the right screwdriver head to remove them (but there’s a solution, so read on). Unless you figure something out, you can say goodbye to cheap repair shops, self assembly and disassembly and so on. Confirmation this is the plan is easy — these screws are only used on the exterior chassis of the iPhone — it is specifically to keep you out of your device.

(From iFixIt): Which devices are affected?

Now that we’ve got the background out of the way, what’s Apple doing with these new fasteners?

Looking bleak? Fret not. iFixIt have found a driver and a selection of replacement screws which they are selling as the iPhone 4 Liberation kit for $9.95. 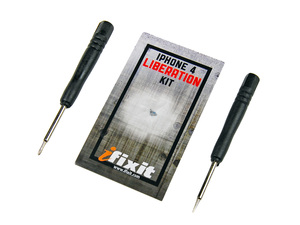