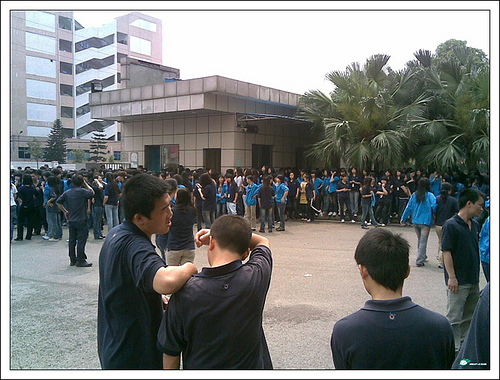 Apple has been slammed by Chinese environmental campaigners, who have ranked it last among 29 tech firms in terms of “responsiveness and transparency to health and environmental concerns” in China.

The Institute of Environmental and Public Affairs (IPE) said Apple had refused to confirm if suspected polluters were among the suppliers it used, and is also accused of avoiding taking responsibility for environmental problems associated with its products.

Apple counters that it has an extensive accreditation scheme for its suppliers and that it has a host of environmental information carried on its website.

However, 2010 saw a dangerous incident at Apple component supplier, Wintek. There poisonous chemicals used in manufacture of displays for Apple’s mobile devices resulted in many workers being hospitalized for nerve damage. It also saw workers launch a lawsuit against the company and go on strike.

Wintek has stopped using that chemical now, but Apple has not acknowledged it uses the company for component supplies, the campaigners complain.

IPE today released “The Other Side of Apple” a report that outlines findings from a group of 36 non-governmental organizations into environmental and health practices among technology companies.

“Apple’s lack of responsiveness eventually made us quite shocked. It’s the whole complacency that it doesn’t have to be accountable to the NGOs, to the communities, even to the poisoned workers,” the IPE’s Ma Jun told Reuters.

Such anxiety in Apple’s China market is badly-timed. Two years ago Apple generated $1 billion business in China. In its last quarter alone it realized $2.6 billion in business in China in three months — maintain that trajectory and it could achieve ten times the business in the country it achieved two years ago in its current financial year. Also of note: Apple’s busiest retail stores aren’t in London or New York, but in China.

Link to the report.