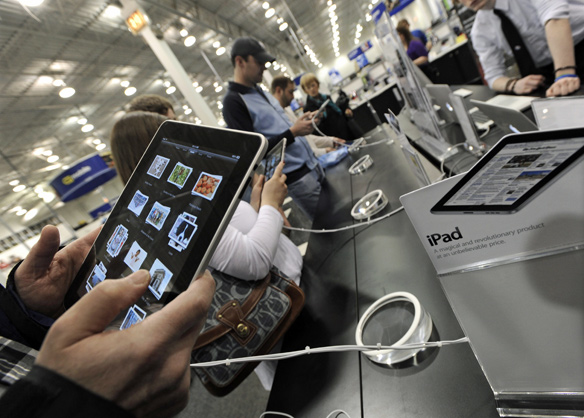 In case you’re still wondering if the iPad 2.0 will have a higher-res screen then here’s the latest claims, this time emanating from our old pals at Digitimes (who apparently don’t read Daring Fireball).

Apparently  “sources” from inside AAPL’s component supply chain are saying the next-gen iPad will host a resolution of 2,048 x 1,536.  We don’t know what to believe anymore!

However, the source isn’t named — perhaps they read 9to5Mac? Sure, we know Apple hasn’t told developers to hike their res yet — instead we’re hearing whispers about a little thing called “resolution independence” (which could make some apps look good on your TV, but I digress).

Or as Digitimes puts it: “Apple has also recently started adjusting its iBooks 1.1 application with some designs for bookmark icons to allow it to support the larger resolution, noted the sources adding that the larger resolution should provide the company’s App developers more convenience, while all future applications will be able to run under any of Apple’s machines including the 27-inch iMac.”

I’ve heard some bloke in a bar boast this feature will be coming along in iOS 5, and while I can’t confirm this for you, I should imagine a screen resolution such as this would be enough for all those ‘vapor tablets’ shown in me-too manner at this year’s CES to look like the crummy also rans they actually are. Though that’s just a personal opinion.

Some are wondering if Apple’s shady $3.9 billion investment will have anything to do with displays? I’m beginning to speculate on a need to invest in powerful new graphics processors to power all these things. Thoughts?

Apple’s aiming to ship 40 million iPads this year, though its orderbook for February is expected to drop. (Product transition, anyone?) Has anyone else out there noticed this about the current beta? What could this mean?

“iPad 2 is expected to be available late March or early April,” Digitimes explains/estimates.