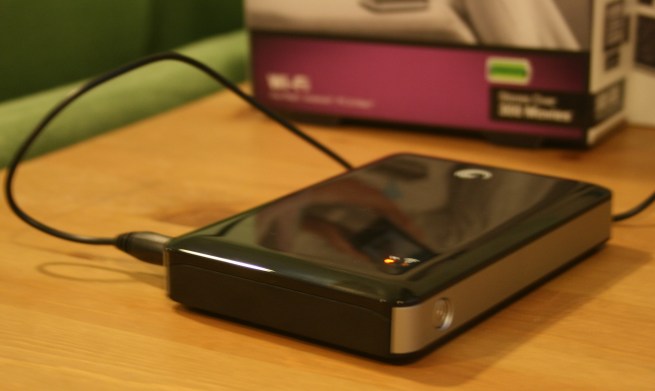 The Post PC age is upon us and we’ve now got new iOS devices in all shapes and sizes in our homes.  But getting and sharing media to all of these many devices starts to become a chore, especially when on the go.  One solution is moving media into an Internet-connected NAS or the (i)Cloud.

Unfortunately, pulling that data down to your iDevice when you are on the go, especially high quality video, can be an expensive burden on your wireless data plan.  Just a few movies can put you over your monthly data limit.  And that’s where you have a speedy Internet connection that can handle a full screen movie.  And what do you do when there is no signal (camping?) at all?

Seagate thinks they have a solution to this problem with their new $200 Goflex Satellite 500GB hard drive.  Read on for the full review:

The Satellite is a portable hard drive that contains a battery and some network gear inside which allows it to become a portable network router and storage.  Somehow, Seagate have managed to fit all of this inside a package the size of a typical portable hard drive.  The Satellite comes with a Seagate GoFlex USB3 adapter (which also powers/charges the unit) and a separate USB power cable (redundant? Sure I’ll take another).  Also in the box are an AC adapter and a very clever car DC adapter (this will come in super handy later on). 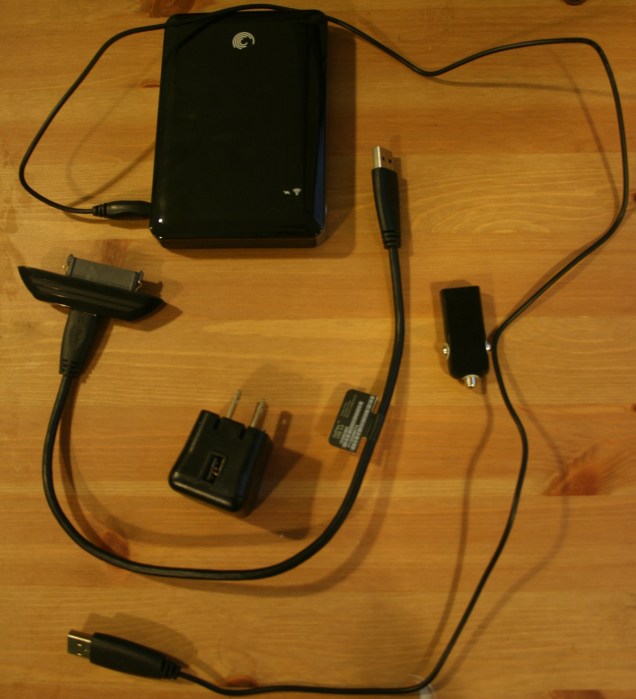 Turning on the drive, it runs very quiet and there are two LED lights which indicate the battery and network.  The most impressive part here is that the Satellite is the same size and weight of a typical portable drive.

Things started to take a turn for the worse here.  It is easy enough to figure out how to connect this to your Mac:  Just plug in the GoFlex adapter to your Mac’s USB port.  It comes up like a normal disk.  The Satellite  comes formatted NTFS and must stay that way because the little internal webserver on this device must only read NTFS volumes.  That presents a host of problems:

The device also comes with some sync software, but don’t even bother.  It doesn’t do photos or big movies and had problems with multiple copies of the same media getting ‘synched’.  That’s fine, that’s what iTunes is for.  I want to put large movies on the device that I don’t have on my computer anyway.

A better way to build these things would be to create an iTunes node and do home sharing.

So dragging and dropping is the easiest way to get files on this device and that works fairly well as long as you have pretty standard file names (no ‘/’s for instance).  The copying is as quick as any USB 2.0 device (again, it would be nice if I could copy wirelessly) but you are basically just dumping your media into one giant volume.

On the iOS device.

The first thing you have to do is join the ‘Satellite’ network (you can change the name of the network in Settings but I had some troubles when I tried to enable a secure connection).  This will cut out your Internet connection so your device is basically just a media player at this point.  That’s fine with me, but those hoping to get see alerts for important emails or other notifications won’t be pleased.

You browse the device in Mobile Safari – it turns any URL into a device browser.

I prefer to just browse the device like a hard drive, retaining my file hierarchy.  But, there are also menu items Photos, Movies, Music and Documents.  Once you open one of these folders, you just have an alphabetized list of your media…you can change the organization to ‘by date’ or ‘by size’ but that’s not going to help if you have huge file lists.

Once you open a file, be it photo, audio or movie, the media gets played pretty reliably as long as the connection stays stable.  I tested three streams at once (iPhone 3G, iPad, and Android device) and they all played without issue simultaneously – just like it says on the box.

One thing I’d note: If you move away from the drive while playing, the speed starts to slow down (dropped packets).

I was able to get through two full length movies on my iPad before the battery died.  Your mileage may vary but with its USB and DC adapter, you’ll be in good shape just about anywhere.

This ended up being a great car device for us.  We can have multiple devices streaming multiple different media at the same time without paying for internet connectivity.  That means music and movies for everyone in the car.  It also stays readily charged with the DC adapter.    With its 30-foot radius, you can leave it in the car and still stream the movies to the house when visiting other people.

I imagine this would also make you very popular on a flight and great for travel with your family, especially internationally.

The Seagate GoFlex Satellite isn’t for everyone.  It is a bit unwieldy to upload and view/listen to your files, especially for those used to the native iOS interface.  But, for those who can handle the ‘nuances’ mentioned above,  this is a great way to save money on data charges and take 500GB of video anywhere in the world.

After testing it for the past few weeks, I think that there is something here for techie people like me, but its probably not for the garden variety Apple user.  Hopefully Seagate sees fit to throw some firmware updates our way.

It is available now for $200 at Amazon and other retailers. 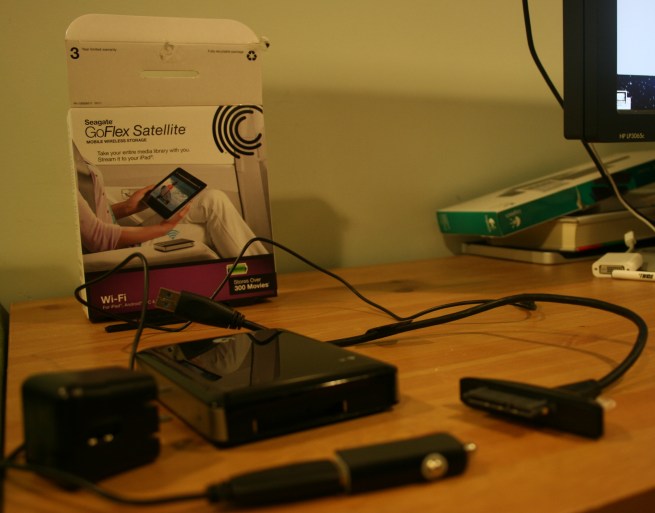 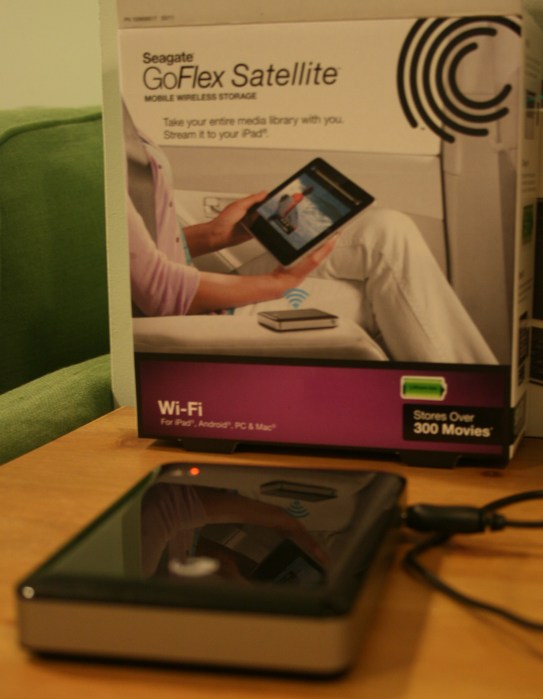