Users will be able to activate the device’s built-in bluetooth support via the standard settings menu. A standard pairing menu will then appear and users will need to connect with a provided passcode. Pretty standard stuff as far as bluetooth device setups go. The interesting and compelling part about these SDK findings is that Apple is opening the door for bluetooth, in general, in their $99 set-top-box. Additionally, this new bluetooth and wireless keyboard support opens up the door for the next-generation of Apple TV services. (Thanks, Sonny Dickson!). 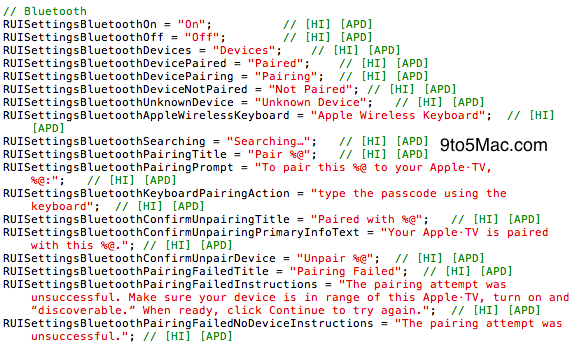 App support was rumored for inclusion in this second generation Apple TV, and perhaps bluetooth accessory and keyboard support is a sign of apps still coming to the television through Apple’s device. Additionally, the Apple TV – a competitor to the Google TV – could benefit from more built-in apps like the Safari web browser. Perhaps with this new bluetooth support, and already existing WiFi support, Apple is putting together a web browser for the Apple TV.

Apple is also rumored to launch a faster Apple TV this fall with their dual-core A5 processor and 1080P video playback support. Perhaps this bluetooth support is only coming in this upgraded model – and perhaps we’ll be hearing more about Apple TV and more uses for it this fall. In any case, bluetooth support for the Apple TV appears to be a lock, based on the above SDK evidence. If not for apps or web browsing, wireless keyboard support will surely help out for content selection – for those without mobile iOS devices.